Brazil‘s ‘super-covid’ variant has arrived in the US with a first case in a Minnesota resident who recently returned from the hard-hit South American country.

The variant – known as P1 – is likely around 50 percent more infectious.

It comes after President Biden reinstated travel bans blocking people travelers from entering the US from several countries with dangerous variants, including the UK and Brazil and added South Africa to the list.

But it was far too late. The Twin Cities resident tested positive for COVID019 on January 9 and was already ill by then.

Brazil’s variant is particularly worrisome because its mutations may render vaccines less effective.

The Brazilian variant has a mutation in its spike protein (circled in yellow) that makes it more contagious, capable of reinfection and potentially more immune to vaccines 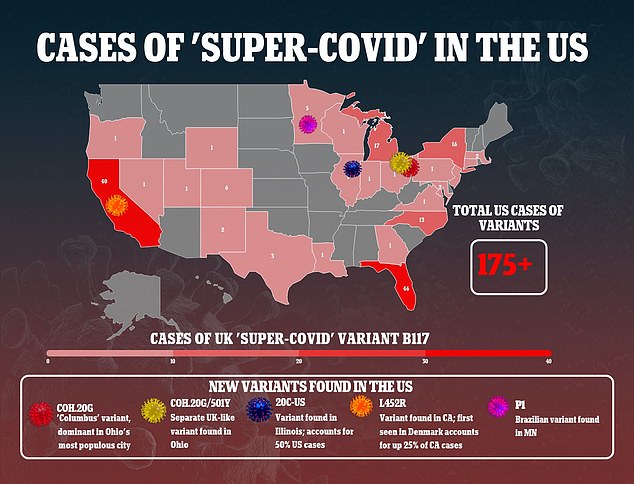 It is the first case of the P1 variant and the second imported variant to be imported to the US.

Just hours earlier on Monday, Dr Scott Gottlieb, a former FDA commissioner and board member of Pfizer said he believed the Brazilian variant was already in the US.

Direct flights between Brazil and the US have long been suspended but itineraries arriving in the US via layovers in others countries have still been available according to quick Google flight searches.

The person who was diagnosed with the new variant is a resident of the US and became ill the first week of January.

When they developed symptoms the person got tested for COVID-19.

Upon getting a positive result, they told the Minnesota health department that they had recently been to Brazil.

The sample was one of 50 random samples that University of Minnesota and state other state labs collected for genetic sequencing – the process that allowed them to tell that it was the new variant.

‘We’re thankful that our testing program helped us find this case, and we thank all Minnesotans who seek out testing when they feel sick or otherwise have reason to get a test,’ said Minnesota Commissioner of Health Jan Malcolm.

‘We know that even as we work hard to defeat COVID-19, the virus continues to evolve as all viruses do. 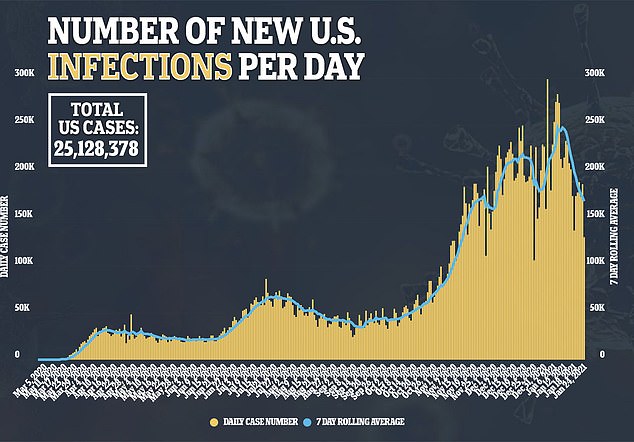 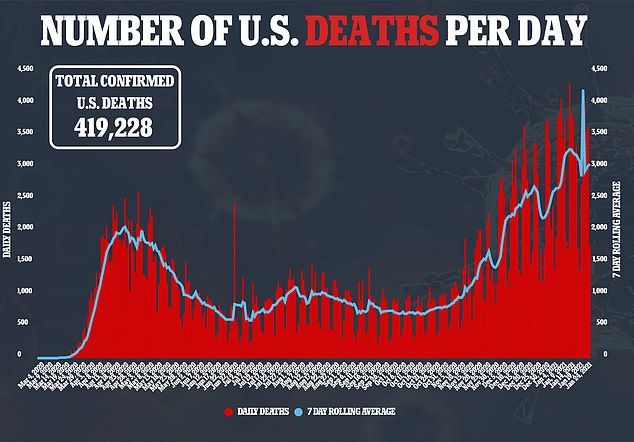 ‘That’s yet another reason why we want to limit COVID-19 transmission – the fewer people who get COVID-19, the fewer opportunities the virus has to evolve.’

On Sunday night, former FDA boss Scott Gottlieb, said he was ‘fairly confident’ the Brazilian variant was already in the US too.

‘I think we have to assume it’s here. And I feel fairly confident that it is here and we’re just not detecting it yet.

‘There might be certain cities where there’s hotspots of this virus, where it might be 5 percent of all infections.

If we’re just sequencing one or two people within each of those cities, it’s unlikely that we’ll pick that up. We need a much broader effort.

‘So I think based on the data we have, we can’t confidently conclude it’s not here.

Brazil is in the clutches of an absolutely devastating outbreak.

The new variant accounts for nearly half of all cases in the Amazons, and hospitals in the largest city in the region, Manaus, are so overwhelmed with patients the city is in the midst of an oxygen shortage.

Data collection in Brazil has not been as consistent, so the actually infectiousness of the new variant is not well understood.

But there are two clues: the devastation seen in the Amazons where the variant is on its way to dominance, and the mutations the Brazil variant shares with the South African one, which Dr Fauci said last week is the most worrisome one for the US.

The South African variant is estimated to be about 50 percent more infectious.

And the spike protein mutation it and the Brazilian variant share may make them both more resistant to vaccines.

In fact, Moderna also announced Monday that while it’s vaccine still works well enough to be protective against the South African variant, lab tests suggest the antibodies triggered by the shot may be 60 percent less potent against the virus in vitro (in a cell culture, not a live animal or person).

It’s possible the Brazilian variant could have a similar impact on the effectiveness of the shot – but it hasn’t been tested directly in the lab, in animals or in humans.

WHAT ARE THE ‘SUPER-COVID’ VARIANTS SPREADING AROUND THE WORLD?

UK health officials announced in December that a ‘variant of concern’ had emerged in Kent.

The variant is known to scientists as B117, a name derived from the location of its most significant mutations.

B117 appears to be more infectious than older ‘wild-type’ coronavirus variants.

Most estimates put it at about 70% more infectious, but some studies suggest it could be twice as infectious, while more moderate projections say its transmissibility is only about 56% higher.

B117 quickly became dominant in the UK, and now accounts for at least 61% of cases there.

It has been detected in 60 countries, including the US, where at least 159 cases in 22 states have been identified.

While its mutations seemed to quite clearly make the variant more infectious, it didn’t seem to change the odds of severe COVID-19 or death.

But UK health officials said Friday it may be 30 to 40% more deadly, based on how many people infected with it die. The mortality rate for people hospitalized with B117 in the UK appears no different from that of older variants.

After reviewing the UK’s data, Dr Anthony Fauci, the top US infectious disease expert said it may indeed be deadlier.

However, he and UK officials still say other variants are more concerning because they may make vaccines less effective – which doesn’t seem to be the case with the UK variant.

A new variant was announced in South Africa on December 18.

It shares a mutation with the UK variant – in a location on its genome known as 501Y – but also has several other mutations.

The South African variant is estimated to be about 50 percent more contagious and is already dominant there.

It has spread to at lest 20 countries, including the UK, which has at least 77 countries.

South Africa’s mutated variant has not yet been spotted in the US – but many experts suspect it is already here.

President Joe Biden invoked a travel ban on people coming from South Africa in an effort to stop importation of the new variant.

Dr Fauci says that the South African variant is the most concerning one because it might render vaccines less effective due to mutations that help it ‘hide’ from antibodies developed after vaccination or a previous bout of COVID-19.

The variant has the same spike protein mutation as the highly transmissible versions found in Kent and South Africa – named N501Y – which makes the spike better able to bind to receptors inside the body.

Manaus, the largest city in the Amazon, has been devastated by COVID-19. Hospitals are running out of oxygen and Brazilian officials have said it is in a state of crisis.

The new variant accounts for nearly half of all cases there and is thought to be more contagious and possibly make vaccines less effective.

The variant has been spotted in Japan, France and Germany. It has not yet been detected in the UK or the US – but former FDA Commissioner Dr Scott Gottlieb said he suspects it has already arrived.

Del Rio and the Call for Migrant Justice